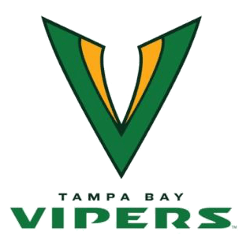 History of the Vipers

The Tampa Bay Vipers are a professional American football team based in Tampa, Florida. The team is an owned-and-operated member of the new XFL founded by Vince McMahon’s Alpha Entertainment and plays its home games at Raymond James Stadium, along with the Tampa Bay Buccaneers of the NFL and the University of South Florida Bulls football team of the NCAA.

The team is headquartered at Plant City Stadium in Plant City, Florida, where players are housed and practices are held.

In contrast to other XFL teams, the Vipers were granted three years rent-free at Raymond James Stadium as part of the team's first lease agreement.

On March 5, 2019, Marc Trestman was announced to be the head coach and general manager of the Tampa Bay XFL team.

On February 9, 2020, the Vipers played their first game in team history, losing to the New York Guardians 23–3.

They won their first game in week 4, shutting out the DC Defenders 25–0.

Nickname
Vipers – This venomous snake with large hinged fangs, typically having a broad head and stout body is commonly found in the Florida area.

Who is the greatest Tampa Bay Vipers?