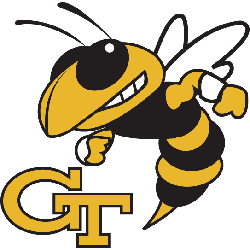 History of the Yellow Jackets

The Georgia Tech Yellow Jackets is the name used for all of the intercollegiate athletic teams that represent the Georgia Institute of Technology (Georgia Tech), located in Atlanta, Georgia. The teams have also been nicknamed the Ramblin' Wreck, Engineers, Blacksmiths, and Golden Tornado. There are eight men's and seven women's teams that compete in the National Collegiate Athletic Association (NCAA) Division I athletics and the Football Bowl Subdivision. Georgia Tech is a member of the Coastal Division in the Atlantic Coast Conference.

The official school colors for Georgia Tech are tech gold and white. Navy blue is often used as a secondary color and for alternate jerseys, while black has been used on rare occasions. The traditional rival in all sports is the in-state University of Georgia. This rivalry is often referred to as Clean, Old-Fashioned Hate. There are also rivalries with out-of-state Auburn and official conference rival Clemson.

The Ramblin' Reck Club is charged with upholding all school traditions and creating new traditions such as the SWARM. The SWARM is a 900-member spirit group seated along the north end zone or on the court at basketball games. This is the group that typically features body painting, organized chants, and general fanaticism.

The marching band that performs at halftime and after big plays during the football season is clad in all white and sits next to SWARM at football games providing a dichotomy of white and gold in the North End Zone. The band is also the primary student organization on campus that upholds the tradition of RAT caps, wherein band freshmen wear the traditional yellow cap at all band events.

Nickname
Yellow Jackets - As far as can be determined, the first reference to Tech students as "Yellowjackets" appeared in the Atlanta Constitution in 1905 and came into common usage at that time.

Historians say the name, spelled as one word, was first used to describe supporters who attended Tech athletic events, dressed in yellow coats and jackets. The actual mascot was conceived at a later date, still undetermined.

Other common nicknames which have applied to Georgia Tech teams include Engineers, which is still used by some writers; the Techs, the first known nickname which was phased out sometime around 1910; and the Blacksmiths, which was common between 1902 and 1904 and is thought to be an invention of sportswriters at the time.

The Golden Tornado is another former nickname thought to be created by sportswriters when John Heisman led Tech to its first national championship in football in 1917. Tech was the first team from the South to earn the honor bestowed by the International News Service, and any team thereafter which approached the same level of excellence was referred to as the Golden Tornado. The nickname was used as late as 1929, when Tech defeated California in the Rose Bowl.

Who is the greatest Georgia Tech Yellow Jackets?