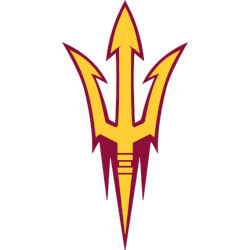 History of the Sun Devils

The Arizona State Sun Devils are the athletic teams that represent Arizona State University. ASU has nine men's and eleven women's varsity teams competing at the National Collegiate Athletic Association (NCAA) Division I level as a member of the Pac-12 Conference. The mascot was adopted in 1946; earlier nicknames were the Normals and later, the Bulldogs. The Sun Devil mascot, Sparky, was designed by former Disney illustrator Bert Anthony. ASU's chief rival is the University of Arizona Wildcats, and both universities' athletics departments compete against each other in the Territorial Cup Series.

The State Press, the student newspaper, ran frequent appeals during the fall of 1946, urging the Bulldog to be replaced by the new Sun Devil. And on November 8, 1946, the student body voted 819 to 196 to make the change. On November 20, says The Arizona Republic, the student council made it official. The following day, the first Arizona State team played as the Sun Devils.

Who is the greatest Arizona State Sun Devils?