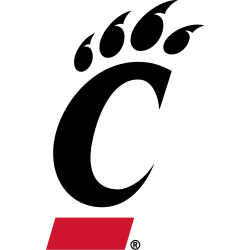 History of the Bearcats

The Cincinnati Bearcats are the athletic teams that represent the University of Cincinnati. Though they will move to the Big 12 Conference (XII) the teams are currently a part of the American Athletic Conference (The American), which from 1979 to 2013 was known as the Big East Conference. Cincinnati and Wichita State University are currently the only members of The American that are located in the Midwestern United States; all other members are in the Northeast or South.

In September 2021, Cincinnati received and accepted a membership offer to the Big 12 Conference. They will join the conference no later than 2024–25.

Cincinnati's men's basketball squads have been a perennial bracket team in the NCAA tournament. A prolific era in Bearcats the basketball was during the late 1950s and early 1960s when the Bearcats posted five consecutive Final Four appearances. Unanimous three-time All-American guard Oscar Robertson led the nation in scoring during the 1957–58, 1958–59, and 1959–60 seasons and posted a career average of 33.8 points per game, which ranks as the third all-time best in Division I.

Nickname
Bearcats - The Bearcat became the UC mascot on October 31, 1914, in a football game against the UK Wildcats. The key players in the birth of the Bearcat were a star UC player named Baehr, a creative cheerleader, and a talented cartoonist. During the second half of that hard-fought football game, UC cheerleader Norman "Pat" Lyon, building on the efforts of fullback Leonard K. "Teddy" Baehr, created the chant: "They may be Wildcats, but we have a Baehr-cat on our side." The crowd took up the cry: "Come on, Baehr-cat!" Cincinnati prevailed, 14–7, and the victory was memorialized in a cartoon published on the front page of the student newspaper, the weekly University News, on November 3. The cartoon, by John "Paddy" Reece, depicted a bedraggled Kentucky Wildcat being chased by a creature labeled "Cincinnati Bear Cat."

The name stuck, but not immediately. Following Teddy Baehr's graduation in 1916, the name dropped out of use, at least in print, for a few years. On November 15, 1919, Cincinnati played at Tennessee. The Cincinnati Enquirer writer Jack Ryder's dispatch on the game was the first time that the major media called UC's teams "Bearcats." From then on, the university's teams were regularly called Bearcats.

Who is the greatest Cincinnati Bearcats?