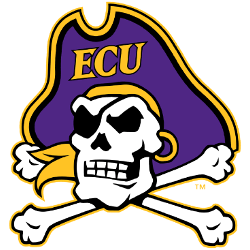 The East Carolina Pirates are the athletic teams that represent East Carolina University (ECU), located in Greenville, North Carolina. All varsity-level sports teams participate at the National Collegiate Athletic Association (NCAA) Division I (Football Bowl Subdivision (FBS) for football) level as a member of the American Athletic Conference. The school became an NCAA member in 1961.

E.C. Victory is the official fight song at East Carolina University. At the beginning of football games, the fight song with a fanfare Here's to the Pirates, the National Anthem, and Alma Mater is played. The Marching Band plays E.C. Victory a total of three times during the pregame show. The song is also played after touchdowns or field goals in football. At the end of football games, the football team walks to the student section to sing the E.C. Victory's song in unison. Many alumni stay to sing the Alma Mater as the last sound before leaving Dowdy–Ficklen Stadium. At men's and women's basketball games the Pep Band plays E.C. Victory at the beginning of the game, beginning of the second half, and when additional crowd involvement is needed. Following the singing of "Take Me Out To The Ballgame" during the Seventh Inning stretch in baseball games, the fight song is played to create additional Diamond Bucs support. The men's and women's swimming and diving teams sing E.C. Victory at their mee

Nickname
Pirates - Pirates have long been associated with the North Carolina coast. One of the most famous pirates, Blackbeard, resided in the North Carolina coastal communities of Bath, Beaufort and Ocracoke. The modern day mascot is based on the description of Blackbeard. Many other pirates used the shallow coast and Outer Banks to evade capture. ECU officially became the Pirates in 1934. In 1983, a contest was developed to name the Pirates. Children from all over Pitt County submitted their ideas, and Pee Dee the Pirate was chosen. The Pee Dee River is a river along the North Carolina and South Carolina border where pirates often set up camp. The name was less than popular with ECU students, and in 1985 Chancellor Howell decided on his own to drop "Pee Dee" and be known only as "The Pirates". People still use the terms Pee Dee and Petey as the terms for The Pirates, and PeeDee is still the name of their mascot.

Who is the greatest East Carolina Pirates?