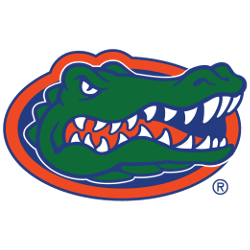 All Florida Gators sports teams compete in NCAA Division I, and 20 of the 21 Gators teams compete in the SEC. The sole University of Florida sports team that does not play in the SEC is the women’s lacrosse team, which joined the American Athletic Conference after the 2018 lacrosse season. The University of Florida was one of the thirteen charter members who joined together to form the new Southeastern Conference in 1932. Previously, the university was a member of the Southern Intercollegiate Athletic Association from 1912 to 1921 and the Southern Conference from 1922 until the SEC began play in the fall of 1933.

Nickname
Gators – As with the school colors, the exact origin of the alligator (almost always shortened to “gator”) as the school mascot is not well documented. It likely originated in 1908, when Gainesville merchant Phillip Miller chose the animal to adorn pennants he designed for sale to students. The school did not yet have a mascot, and Miller chose the alligator because it is native to Florida and was not claimed by any other school. The football team subsequently adopted the “Gators” nickname in 1911. There are two theories as how the name become synonymous with the university’s athletic programs. One theory is that the 1911 football squad began calling themselves the Gators in honor of team captain Neal “Bo Gator” Storter. Storter himself refuted this explanation, saying that it originated when a sportswriter in South Carolina described Florida’s 1911 road upset of Clemson as an “invasion of alligators from Florida” and the players adopted the name. Whatever its origins, the nickname “Gators” (and for a time, “Lady Gators” for women’s sports) has been used by the University of Florida’s athletic program for over a century.

Who is the greatest Florida Gators?