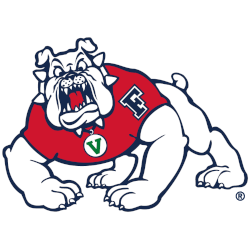 History of the Bulldogs

The Fresno State Bulldogs are the intercollegiate athletic teams that represent California State University, Fresno (commonly referred to as Fresno State). The university is a member of NCAA Division I's Mountain West Conference (MW). It was a member of the Western Athletic Conference from 1992 until 2012 when it left for the Mountain West alongside fellow WAC member Nevada.

The university has won two NCAA Division I Championships, in softball (1998) and baseball (2008).

Victor E. Bulldog: The bulldog mascot was chosen when, in 1921, a white bulldog appeared on campus and immediately took to the student body president and his friends. His name is Victor E. The current mascot of Fresno State has the name Victor E. Bulldog III. He was born on March 14, 2015.

V is for Valley: The green "V" featured on Fresno State uniforms is a tribute to the agricultural community of the San Joaquin Valley, the world's richest agricultural area in export dollars in which Fresno is located. The tribute began in 1997 when new football head coach Pat Hill instituted the green V on the back of the helmets (a tradition later adopted by the other programs) as a means of integrating the school and the community.

Nickname
Bulldogs - Late in their initial 1921 season, student body president Warren Moody and friends were continually greeted outside the main campus building by a white bulldog. The dog adopted the group and they decided to make him the mascot. Arids Walker made the motion to adopt "Bulldogs" as the official nickname in a student body meeting. It was on November 21, 1921, that the Morning Republican first referred to Fresno State as the "Bulldogs."

Who is the greatest Fresno State Bulldogs?