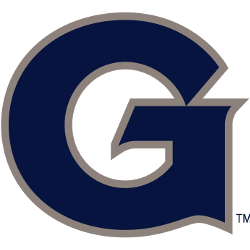 The Georgetown Fight Song, known as "There Goes Old Georgetown", is actually an amalgamation of three songs, only the oldest of which, 1913's "The Touchdown Song", contains the lyric "here goes old Georgetown". Students combined a version of "The Touchdown Song" with "Cheer for Victory", written in 1915, and "The Hoya Song", written in 1930, both of which are included in their entirety. The authors of these songs, and of the combined version, are unknown.

Georgetown's fight song is rare among U.S. university fight songs for mentioning other colleges by name. Specifically, it mentions Yale University, Harvard University, Princeton University, College of the Holy Cross, the United States Naval Academy, and Cornell University, who were all rivals of Georgetown in the early to mid-20th century, and mocks their fight songs. In recent years the Hoyas only play Cornell and Holy Cross regularly (in football), and many of these schools no longer use the fight songs that Georgetown's song mocks.

Nickname
Hoyas - The University admits that the precise origin of the term "Hoya" is unknown. At some point before 1893, and likely before 1891, students versed in classical languages combined the Greek hoia or hoya, meaning "what" or "such", and the Latin saxa to form Hoya Saxa!, or "What Rocks!" This cheer may either refer to the stalwart defense of the football team, or to the baseball team, which was nicknamed the "Stonewalls", or to the actual stone wall that surrounds the campus. Father William McFadden, S.J., campus Jesuit and the team's in-house announcer at the Capital One Arena, has disputed the Greek and Latin origin, suggesting the classical words were retroactively applied to a nonsensical cheer.
Five young shirtless men pose defiantly in a crowd. Each has a letter in blue on their chests to spell HOYAS.

After World War I, the term "Hoya" was increasingly used on campus, including for the newspaper and the school mascot. In 1920, students began publishing the campus's first sports newspaper under the name The Hoya, after successfully petitioning the Dean of the College to use it instead of the proposed name, The Hilltopper. "Hilltoppers" was also a name sometimes used for the sports teams. By the fall of 1928, the newspaper had taken to referring to the sports teams as the Hoyas. This was influenced by a popular half time show at football games, where the mascot, a dog nicknamed "Hoya," would entertain fans.

Who is the greatest Georgetown Hoyas?