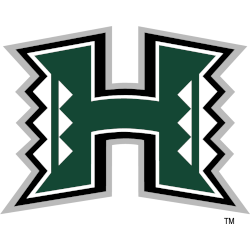 History of the Warriors

The University of Hawaiʻi Rainbow Warriors and Rainbow Wāhine are the athletic teams that represent the University of Hawaiʻi at Mānoa (UH), in Honolulu, Hawaii. The UH athletics program is a member of the Big West Conference in most sports and competes at the NCAA Division I level. It comprises seven men's, 12 women's, and two coed athletic teams.

Through 1923, the UH teams were called the "Deans." In the final game of the 1923 season, the football team upset Oregon State, with a rainbow appearing over the stadium during the game. Sportswriters began referring to UH teams as the "Rainbows," and the tradition was born that Hawaii could not lose if a rainbow appeared. The rainbow officially became a part of the school's athletic logo in 1982 and remained until 2000.

King Kamehameha the Great and his warriors united the Hawaiian Islands, earning the warrior a place of honor in Hawaiian history and an expectation of strength, skill, and a fighting spirit. The UH teams became known as "Rainbow Warriors" long before the name became official in 1974.

When women's teams were begun in 1972, founder and first women's athletic director Dr. Donnis Thompson named the teams the "Rainbow Wāhine" with "wāhine" being Hawaiian for women.

Both the men's and the women's teams have long been known as the "Rainbows" or merely the "'Bows."

Nickname
Warriors - A controversial change in 2000 allowed each team to pick its own team name; the football, men's volleyball, golf, and tennis teams became the Warriors, while the men's basketball and swimming & diving teams remained Rainbow Warriors, and the baseball team became the Rainbows. The women's teams, however, all remained the “Rainbow Wāhine." At the same time, the school changed its athletics logo to the current stylized "H", omitting the rainbow of the old logo altogether.

Who is the greatest Hawaii Warriors?