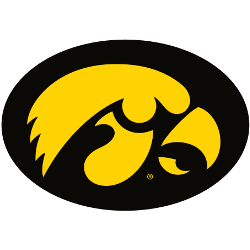 History of the Hawkeyes

The Iowa Hawkeyes are the athletic teams that represent the University of Iowa, located in Iowa City, Iowa. The Hawkeyes have varsity teams in 22 sports, 8 for men and 14 for women; a 15th women's sport will be added in 2023. The teams participate in Division I of the National Collegiate Athletic Association (NCAA) and are members of the Big Ten Conference. Currently, the school's athletic director is Gary Barta.

Historically, Iowa has been very successful in wrestling, with 37 team Big Ten championships and 24 team national championships. The Hawkeyes have also won national championships in five other sports: men's gymnastics, football, field hockey, rifle, and women's track and field. In basketball, Iowa has reached the NCAA Final Four on four occasions. The men's team has done this three times, most recently in 1980, while the women's team has done it once, in 1993. The baseball team reached the College World Series once, in 1972. Iowa's softball team has played in the Women's College World Series on four occasions, most recently in 2001.

Nickname
Hawkeyes - The state of Iowa’s nickname is the Hawkeye State, and the University of Iowa borrowed its athletic nickname from the state many years ago. It is not clear how Iowans became Hawkeyes, but the nickname was first recorded in 1859. Some people believe that a Burlington judge, David Rorer, suggested the nickname based on a character in The Last of the Mohicans by James Fenimore Cooper.

The name also got support from James G. Edwards of Fort Madison. Edwards, editor of the Fort Madison Patriot, moved his newspaper to Burlington, Iowa, and renamed it the Hawk-Eye and Iowa Patriot. The campaign to popularize the name was rewarded when territorial officials gave their formal approval in 1838.

The Hawkeye nickname gained a tangible symbol in 1948 when a cartoon character, later to be named Herky the Hawk, was hatched.

Who is the greatest Iowa Hawkeyes?