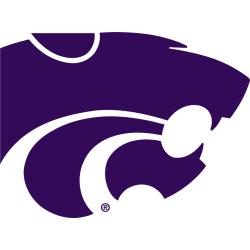 The official color of the teams is Royal Purple, making Kansas State one of very few schools (as well as Syracuse and Harvard) that have only one official color; white and silver are generally used as complementary colors.

Kansas State participates in the NCAA Division I FBS (Football Bowl Subdivision) and is a member of the Big 12 Conference since 1996. Previously, Kansas State competed in the Kansas Collegiate Athletic Conference until 1912; the Missouri Valley Intercollegiate Athletic Association from 1913 to 1928; and the Big Eight Conference from 1928 to 1996 (known as the Big Six from 1928 to 1947 and the Big Seven from 1947 to 1957).

Nickname
Wildcats - K-State hasn't always associated itself with the feline family. The name "Aggies" was the first used by the school in the late l890s by head football coach John "Chief' Bender. The new coach made his mark on K-State history when he gave his team the "Wildcat" nickname. However, Coach Bender soon left the K-State program and the Wildcat nickname became a stray.

Who is the greatest Kansas State Wildcats?