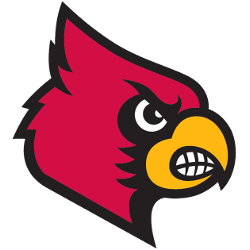 Nickname
Cardinals – It is not clear when the University of Louisville adopted red and black as its colors, or what the selection process entailed. Many sources repeat the story that Ellen Patterson, wife of Dean of the College of Arts and Sciences (or Liberal Arts as it was then known) John L. Patterson, suggested the colors as well as the use of the cardinal bird as a mascot in 1913. Ms. Patterson made this suggestion to a “board in control” (of which Dean Patterson was a member) that worked with a student athletic association to manage sports at UofL. However, the Courier-Journal refers to the University of Louisville football team as “the Red and Black” in an article that ran in October 1912. In November 1912 the Courier-Journal reported that S.W. Walker was re-elected captain of the Cardinals. Either Ms. Patterson made the suggestion prior to 1913, or the suggestion was to make a perhaps-unofficial designation into an official one. Unfortunately, university records from that period are sparse, and do not speak to the question.

Who is the greatest Louisville Cardinals?