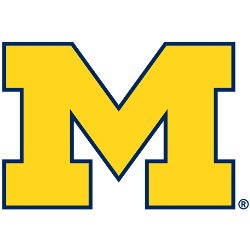 Winged football helmet - Famed football coach Herbert "Fritz" Crisler is credited with popularizing the winged helmet nationwide. In 1935, while head coach at Princeton University, Crisler ordered stock helmets bearing leather wings out of the Spalding catalog. He had the leather panels painted in contrasting orange and black colors, believing the design to have practical advantages on the field. In 1938, Crisler became head football coach and athletic director at the University of Michigan, where he added maize and blue coloring to the stock design. These helmets made their debut at the Wolverines' 1938 season opener against Michigan State and have been worn ever since. It has become an icon of Michigan's football program, which held it exclusively for more than seventy years.

Nickname
Wolverines - Since the earliest days of recorded University of Michigan history (as early as 1861), the students and alumni have been referring to themselves as "Wolverines". How the ferocious animal came be associated with the state and adopted as the university mascot remains a bit of a mystery, but there are several theories.

The great Michigan football coach Fielding H. Yost had a theory for the nickname, which he wrote about in the Michigan Quarterly Review in 1944. Yost felt that the reason for the nickname concerned the trading of wolverine pelts which occurred at Sault Ste. Marie for many years. The trading station served as an exchange between the Indians, other trappers and fur traders, who would eventually ship the products off to the Eastern United States. Because many of the furs were in fact wolverine pelts, the traders may have referred to them as "Michigan wolverines," leading to the state nickname and ultimately to the University of Michigan symbol.

Who is the greatest Michigan Wolverines?