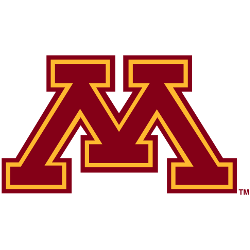 The Gophers women's ice hockey team is a six-time NCAA champion and seven-time national champion. In women's ice hockey, the Gophers belong to the Western Collegiate Hockey Association. In all other sports, they belong to the Big Ten Conference. Most of the facilities that the teams use for training and competitive play are located on the East Bank of the Minneapolis campus. There are arenas for men's and women's basketball (Williams Arena) as well as ice hockey (Mariucci Arena and Ridder Arena). The Gopher football team began playing at TCF Bank Stadium in September 2009. The women's soccer team plays on the St. Paul campus in Elizabeth Lyle Robbie Stadium.

Nickname
Golden Gophers - The University Mascot is derived from a nickname for the state of Minnesota, "The Gopher State." The original design was based on the thirteen-lined ground squirrel. The state nickname derives from a political cartoon by R. O. Sweeny, published as a broadside in 1858. The cartoon depicted state legislators as gophers dragging the state in the wrong direction. The nickname was associated with the university as early as the publication of the first yearbook in 1888, which was titled "The Gopher". Other early yearbooks included depictions of gophers as well, and the University of Minnesota football coach Clarence Spears officially named the football team the Gophers in 1926. After the radio announcer Halsey Hall began referring to the team as the Golden Gophers due to the color of their uniforms, the team was renamed under coach Bernie Bierman.

Who is the greatest Minnesota Golden Gophers?