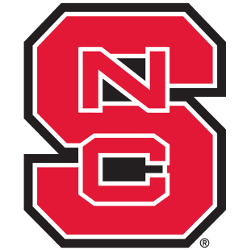 The primary logo for NC State athletics is a red block ‘S’ with an inscribed ‘N’ and ‘C’. The block S has been in use since 1890 but has seen many alterations through the years. The color red was adopted from the state bird, the cardinal. It became the sole logo for all NC State athletic teams in 2000 and was modernized to its current design in 2006.

Nickname
Wolfpack – The athletic teams were inconsistently referred to as “The Farmers”, “The Mechanics”, “The Aggies”, and “The Techs”.
The basketball team became known as the Red Terrors and a bull terrier named Togo became the mascot.
The nickname “Wolfpack” was first used in reference to the football team when a letter was written to the school paper complaining that the football players were as “unruly as a pack of wolves”
Chancellor J. W. Harrelson asked students to suggest a new name for the sports teams. The football team had increasingly become known as the Wolfpack, while other NC State athletic teams were still referred to as Red Terrors. The Chancellor disliked the term Wolfpack because of connotations with World War II German U-boat formations. However, the students voted overwhelmingly to keep the nickname Wolfpack and use it for all the athletic teams. Go Pack!

Who is the greatest North Carolina State Wolfpack?