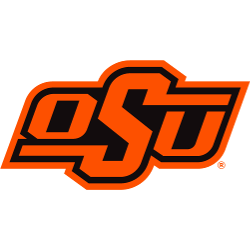 Nickname
Cowboys - Around 1923, when Oklahoma A&M College was searching for a new mascot to replace their tiger (which had been copied from Princeton and accounts for the orange and black school colors), a group of students saw Frank Eaton leading Stillwater's Armistice Day Parade. He was approached to see if he would be interested in being the model for the new mascot, and he agreed. A likeness was drawn and began to be used on sweatshirts, stickers, etc. and a tradition was born. That caricature was the basis for what is used today as the official Oklahoma State University mascot. For thirty-five years, the crusty old cowboy was a living symbol of OSU, representing the colorful past of the area. As such, he would attend OSU athletic events, building dedications, etc., and sign autographs, pose for photographs and reminisce about the American Old West with anyone who would listen.

However, it was not until 1958 that "Pistol Pete" was adopted as the school's mascot. The familiar caricature of "Pistol Pete" was officially sanctioned in 1984 by Oklahoma State University as a licensed symbol.

Who is the greatest Oklahoma State Cowboys?