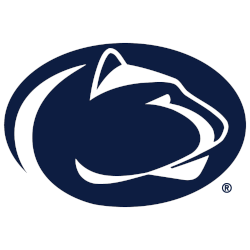 History of the Nittany Lions

The Penn State Nittany Lions are the athletic teams of Pennsylvania State University, except for the women's basketball team, known as the Lady Lions. The school colors are navy blue and white. The school mascot is the Nittany Lion. The intercollegiate athletics logo was commissioned in 1983.

Penn State participates as a member institution of the Big Ten Conference at the National Collegiate Athletic Association (NCAA) Division I Football Bowl Subdivision (FBS) level for most sports. Penn State is one of only 15 universities in the nation that plays Division I FBS football and Division I men's ice hockey. Two sports participate in different conferences because they are not sponsored by the Big Ten: men's volleyball in the Eastern Intercollegiate Volleyball Association (EIVA) and women's ice hockey in College Hockey America (CHA). The fencing teams operate as independents.

Nickname
Nittany Lions - In 1904, Penn State baseball player Joe Mason came up with the moniker. At the time, Penn State didn’t have a mascot, so when Princeton players gibed the Penn State team over how their Bengal tiger mascot was the coolest, Mason retorted that Penn State had the Nittany Lions, “the fiercest beast of them all.”

The name came from their locations: Penn State is situated in the Nittany Valley near Nittany Mountain, and the lions he was referring to were mountain lions that once roamed the region.

Who is the greatest Penn State Nittany Lions?