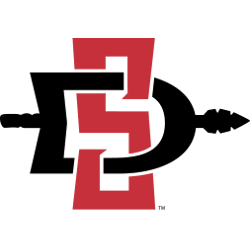 History of the Aztecs

The first Aztec Warrior figure associated with the university initially appeared at a San Diego State athletic event over six decades ago. Art Munzig played the original role in a skit during halftime at the San Diego State-Pomona football game kicking off the 1941 football season. The school's Rally Committee came up with the idea based on the ruler of the Aztec empire in the early 1500s, Moctezuma II. The character, affectionately known as "Monty" to generations of SDSU alumni, evolved through the years to become emblematic of San Diego State's athletic teams.

For decades the role was filled mostly by students, who inspired enthusiasm and school spirit during football and basketball games. In 1983, however, Director of Athletics Mary Hill directed Montezuma to adopt a more dignified persona. During that football season, Monty sat atop a pyramid among his attendants on the sidelines at Jack Murphy Stadium. That lasted one year. The next season Moctezuma resumed his more traditional role of involvement and encouragement of Aztec football fans.

Beginning in 2000, some student groups began to propose the university alter its Aztec identity. The new mascot made his first public appearance on February 23, 2004, to reveal some costume changes and the modified moniker, "Aztec Warrior." For all but a very few years from the early 1990s through 2006, Carlos Gutierrez took over the role of mascot, raising the position's profile and expanding public appearances throughout the San Diego community. In April 2006, the SDSU Alumni Association sponsored student auditions for a new Aztec Warrior.

Nickname
Aztecs - After nearly three decades of unofficial nicknames, including Professors and Wampus Cats, the student body votes to adopt the Aztec moniker. The decision to choose the Aztec as a moniker was in conjunction with preliminary plans to move to a new campus and was done in unison with changing the name of the school newspaper to ‘The Aztec’ and featuring a yearbook with prominent Aztec symbols.

Who is the greatest San Diego State Aztecs?