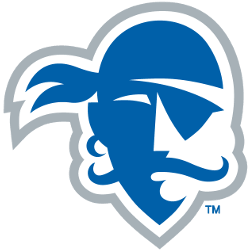 The high point of the Big East era for Seton Hall came when P. J. Carlesimo was hired in 1982 and the team began playing in the Meadowlands Arena. By 1988, Carlesimo led the Pirates to the school's first NCAA tournament appearance, and in 1989, he led the Hall to an unexpected tournament run to the NCAA Championship game, where they were defeated by Michigan in overtime. Success under Carlesimo continued with a Big East Tournament Championship and an Elite Eight appearance in 1991, a regular season Big East Championship and Sweet Sixteen appearance in 1992, and Big East Regular Season and Big East Tournament Championships in 1993. Carlesimo left to coach in the NBA following the 1993–94 season, but Seton Hall returned to the Sweet Sixteen in 2000 guided by coach Tommy Amaker and appeared in the NCAA tournament in 2004 and 2006 coached by Louis Orr.

Nickname
Pirates - The date is April 24, 1931. Comfortably ahead by four runs in the ninth inning, fans of the defending Eastern Intercollegiate Champion Holy Cross Crusaders are filing towards the exits, assured that their home team had placed another notch in the win column.

In quintessential Seton Hall style, the Seton Hall nine gives clear notice that they did not share the same sentiment. The visiting team shot ahead behind a series of walks, hits, and errors that caused many of the departing Crusader supporters to promptly pull an about-face. Five runs later, Seton Hall had taken an 11-10 advantage that would eventually stand as the game's final score. That day, Seton Hall became the first team in four years to defeat regional power Holy Cross twice in the same season and that day, Pirates became synonymous with the blue & white.

The commotion that was the last-ditch comeback prompted a local sportswriter in attendance to exclaim, "This Seton Hall team is a gang of Pirates!" Upon hearing of the proclamation after the game, the Seton Hall team decided that their newfound name was fitting and that they would return to South Orange and be known as the Pirates thereafter.

Who is the greatest Seton Hall Pirates?