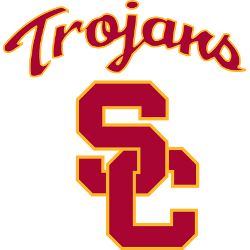 While the men's teams are nicknamed the Trojans, the women's athletic teams are referred to as either the Trojans or Women of Troy (the university officially approves both terms). The program participates in the Pac-12 Conference and has won 130 team national championships, 107 of which are National Collegiate Athletic Association (NCAA) national championships. USC's official colors are cardinal and gold. The Trojans have a cross-town rivalry with UCLA. However, USC's rivalry with Notre Dame predates the UCLA rivalry by three years. The Notre Dame rivalry stems mainly from the annual football game played between these two universities and is considered the greatest intersectional rivalry in college football.

Up to that time, teams from USC were called the Methodists or Wesleyans and neither nickname was looked upon with favor by university officials. Athletic Director Warren Bovard, son of university president Dr. George Bovard, asked Los Angeles Times sports editor Owen Bird to select an appropriate nickname.

"At this time, the athletes and coaches of the university were under terrific handicaps," Bird recalled. "They were facing teams that were bigger and better-equipped, yet they had splendid fighting spirit. The name 'Trojans' fitted them.

"I came out with an article prior to a showdown between USC and Stanford in which I called attention to the fighting spirit of USC athletes and named them 'Trojan' all the time, and it stuck.

Who is the greatest Southern California Trojans?