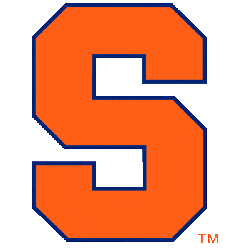 In 1931, a Native American warrior known as Nathan March aka: "Saltine Warrior" became the athletic mascot. The name derived from an article describing an archaeological dig on campus allegedly uncovering the artifacts of a Native American warrior. The warrior was called the "Saltine Warrior" because of the abundant salt deposits in the Syracuse, New York area. The article was later revealed to be a hoax, but the mascot remained for next four decades.

In the mid-1950s, the father of a Lambda Chi Alpha fraternity brother owned a cheerleading camp. He made a Saltine Warrior costume for his son to wear at Syracuse football games. Thus began a nearly forty-year tradition of Lambda Chi brothers serving as the university's mascot.

In 1978, the Saltine Warrior was banned by the university as part of the national movement to eliminate Native American motifs, becoming one of the first colleges to do so. The mascot briefly morphed into a Roman warrior, but was eventually replaced unofficially in 1982 by a giant, cartoon-style Orange.

Nickname
Orange - Syracuse used to be known as the Orangemen prior to a Nike-led change in 2004. Syracuse officials made the switch from Orangemen to Orange in 2004 after two years of consulting with Nike regarding the school's desire to re-brand its athletic teams.

Syracuse went Orange in 1890, becoming the first university to adopt only one official color. In the years prior, the school colors were a light pink and pea green, then light pink and blue. After a winning athletics meet with Hamilton College, Syracuse students wanted colors as bold as they were. They considered orange, with blue as a secondary color, but orange alone was not claimed by any other school, and thus, was Syracuse's for the taking. It was adopted unanimously by a student committee, faculty, the Alumni Association, and Trustees, and remains Syracuse University's official color to this day. Today, you'll see students sporting orange year-round, but especially on game days when the whole Syracuse and Central New York community joins and displays their Orange pride.

Who is the greatest Syracuse Orange?