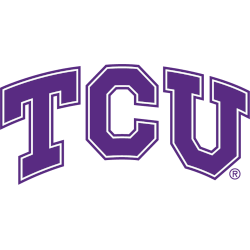 The 18 varsity TCU teams participate in NCAA Division I and in the Football Bowl Subdivision (FBS) for football, competing mostly in the Big 12 Conference. The school was a founding member of the Southwest Conference and was a member of the Western Athletic Conference, Conference USA, and the Mountain West Conference before joining the Big 12. Two TCU teams participate outside the Big 12 in sports not sponsored by that conference. The rifle team competes in the Patriot Rifle Conference, and the beach volleyball team is set to join the Coastal Collegiate Sports Association (CCSA) for the 2018–19 school year.

Nickname
Horned Frogs - The horned frog is actually a horned lizard, which is native to Texas and is one of about 14 North American species of "spikey-bodied reptiles."

The reptile became Texas Christian University's mascot after its appearance first on the school's yearbook publication. Its annual was named "The Horned Frog" in 1887 and was selected over the other option "The Cactus." Gradually, the name leaked into the athletic department and sports teams began being called the Horned Frogs as well.

Who is the greatest TCU Horned Frogs?