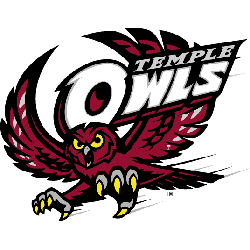 During the 1950s, the Temple basketball team made two NCAA Final Four appearances (1956, 1958) under legendary Head Coach Harry Litwack. Litwack would be inducted into the Naismith Memorial Basketball Hall of Fame after concluding a 21-year coaching career that included 373 wins. Head Coach John Chaney, also a Hall of Famer, won a total of 724 career games and took Temple to the NCAA tournament 17 times. His 1987 - 1988 Owls team entered the NCAA tournament ranked #1 in the country, and he has reached the Elite Eight on five occasions. He was consensus national coach of the year in 1988. Former NBA players Eddie Jones of the Miami Heat, Aaron McKie of the Los Angeles Lakers, Rick Brunson of the New York Knicks, and Mardy Collins, formerly of the Los Angeles Clippers, are also part of Temple's basketball heritage.

Nickname
Owls - The owl has been the symbol and mascot for Temple University since its founding in the 1880s. Temple was the first school in the United States to adopt the owl as its symbol or mascot. The owl, a nocturnal hunter, was initially adopted as a symbol because Temple University began as a night school for young people of limited means. Russell Conwell, Temple's founder, encouraged these students with the remark: "The owl of the night makes the eagle of the day."

Who is the greatest Temple Owls?