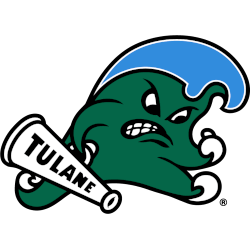 History of the Green Wave

The Tulane Green Wave is the athletic teams that represent Tulane University, located in New Orleans, Louisiana. Tulane competes in NCAA Division I as a member of the American Athletic Conference (The American). There are 14 Green Wave intercollegiate programs.

New head coach Perry Clark rebuilt the program to unprecedented success, including a 1991 - 1992 season that started 13–0 and ended in the second round of the NCAA Tournament. The 1992 - 1993 and 1994 - 1995 teams matched that team's success, but Tulane hasn't approached such heights since. Clark resigned in 2000 to coach the Miami Hurricanes.

Nickname
Green Wave - From 1893 to 1919, the athletic teams of Tulane were known as the Olive and Blue for the official school colors. In 1919, the Tulane Weekly, one of Tulane's many student newspapers at the time, began referring to the football team as the Greenbacks.

On Oct. 20, 1920, Earl Sparling, editor of the Tulane Hullabaloo, wrote a football song that was printed in the newspaper. The song was titled "The Rolling Green Wave." Although the name was not immediately adopted, it began to receive acceptance. On Nov. 19, 1920, a report of the Tulane-Mississippi A&M game in the Hullabaloo referred to the team as the Green Wave. By the end of the season, the Hullabaloo was using the term Green Wave to refer to all Tulane athletic teams, as were many daily papers.

Though the "official" nickname was Green Wave the term Greenbacks and Greenies, for the color of their jerseys, stayed in use throughout that time period.

Who is the greatest Tulane Green Wave?