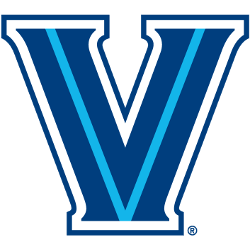 Villanova plays its arch rival the Delaware Fightin' Blue Hens in the "Battle of the Blue". Villanova leads the all-time series which was first played in 1895 by the margin of 23-21-1. The Wildcats have a current series where they play the Temple Owls for the Philadelphia "Mayor's Cup". Villanova won the inaugural game in September 2009 but dropped the next three games to the FBS school. Villanova still leads the all-time series that started in 1928 by the margin of 16-15-2. In recent seasons the Wildcats also play the Penn Quakers with many of the games held at historic Franklin Field. Villanova has an 11–6 lead in the series first played in 1905 and most recently in 2015.

Nickname
Wildcats - In 1926, a contest was conducted involving the entire university, to adopt a mascot for Villanova. Edward Hunsinger, a former All-American defensive end at Notre Dame, hit upon the nickname "Wildcats". Hunsinger was nicknamed the "Little General" of the legendary "Four Horsemen" and he had recently been added to Villanova's football staff as the assistant coach.

The name Wildcats refers to a wide variety of feral felines such as the bobcat, caracal, and lynx. Villanova's Wildcat most closely resembles the bobcat, which is found in the Southwest part of the United States. The term Wildcats is meant to convey the image of an animal that is successful in its quest to survive using its ferocious attitude, speed, agility, and alertness. The spirit of the Wildcat is embodied in all of our athletic teams.

Who is the greatest Villanova Wildcats?