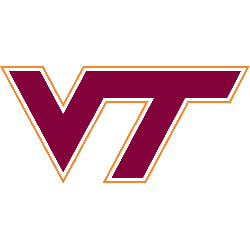 The stylized VT (the abbreviation for Virginia Tech) is used primarily by the athletic department as a symbol for Virginia Tech athletic teams. The "athletic VT" symbol is trademarked by the university and appears frequently on licensed merchandise.

During the early years of the university, a rivalry developed between the Virginia Military Institute and Virginia Tech, then called VPI. This rivalry developed into the original "Military Classic of the South," which was an annual football game between VMI and VPI on Thanksgiving Day in Roanoke, Virginia. This rivalry continued until 1970 when Tech's football program became too large and too competitive for VMI. Today, Tech's major athletic rivalries include the Virginia Cavaliers (see Virginia-Virginia Tech rivalry), the West Virginia Mountaineers, and the Miami Hurricanes.

Virginia Tech's fight song, Tech Triumph, was written in 1919 and remains in use today. Tech Triumph is played at sporting events by both the Virginia Tech band, The Marching Virginians, and the Corps of Cadets' band, the Highty Tighties. The Old Hokie spirit yell, in use since 1896, is familiar to all Tech fans.

Many of Tech's more modern traditions were adopted after the construction of Lane Stadium in 1964. Virginia Tech's football traditions and the school's fans are the subject of a 2007 full-length documentary called Hokie Nation which features a mix of interviews with coaches, players and fans as well as a look at Hokie football history and the direction of the program.

Nickname
Hokies - The Virginia Tech Hokie is a thing of mystery. For fans unfamiliar with Tech's mascot, the much-beloved bird is an orange and maroon turkey—but it's called a HokieBird, hence the nickname "Hokies."

The nickname originated in the 1896 when the Virginia Agricultural and Mechanical College (VAMC) changed its name Virginia Polytechnic Institute, now known commonly as Virginia Tech. Then abbreviated as "V.P.I," school administrators held a contest to find a new cheer to go with the University's new name.

Senior O.M. Stull won the contest with his cheer, "Hoki, Hoki, Hoki, Hy; Techs! Techs! V.P.I." While Stull later admitted that the word 'hoki' had no real meaning, it worked as an attention-getter. The term stuck.

Who is the greatest Virginia Tech Hokies?