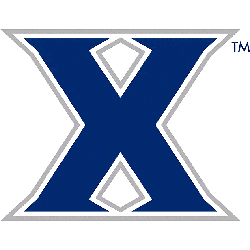 History of the Musketeers

The Xavier Musketeers are the 16 teams representing Xavier University in intercollegiate athletics, including men's and women's basketball, cross country, golf, soccer, swimming, tennis, indoor track and field, and outdoor track and field. The Musketeers compete in the NCAA Division I and are members of the Big East Conference. Their official colors are Xavier blue, silver metallic, silver gray, and white.

On March 20, 2013, the Xavier administration announced that the university would leave the Atlantic 10 Conference to join the Big East, and it moved to the new conference on July 1, 2013.

Xavier currently plays its home games at the Cintas Center, a 10,224-seat multi-purpose arena that opened in 2000. The Cintas Center is the fifth different home site in program history.

At Cintas Center, Xavier enjoys one of the nation's best home court advantages. As of April 2018, the Musketeers have compiled a 258–41 (a .863 winning percentage) record since moving to its on-campus home in 2000. Xavier enjoyed a 15–0 mark at home during 2009–10, it's the only perfect record for a season at Cintas Center. During the 2017–2018 season, the Musketeers set a Cintas Center record with 17 home victories. The building was named the #3 "Toughest Place to Play" on EA Sports' NCAA Basketball '10. In August 2018 the NCAA named it as the 8th toughest home court in college basketball.

Nickname
Musketeers - "The Musketeers" was adopted as Xavier's nickname in 1925 to symbolize the "All for One, One for All" spirit of the University.

Who is the greatest Xavier Musketeers?