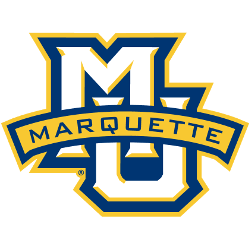 The men’s basketball team is ninth in the NCAA for postseason appearances all-time (45), including 30 NCAA Tournament appearances (T-11th all-time). The Warriors, coached by Al McGuire, won the 1977 NCAA Tournament and were runners-up in 1974. Maurice “Bo” Ellis was a member of each of those teams and remains the only Marquette player to appear in two Final Fours.

Nickname
Golden Eagles – From 1954 to 1994 Marquette athletics nickname was officially the Warriors for all sports. Prior to that period, athletic teams were known as the Blue & Gold unofficially, then the Hilltoppers officially, but then eventually the Golden Avalanche was used for the Men’s Football team only.

In 1993-1994 Father DiUlio, who was the president of the university at the time, outraged students and alums by deciding to change the team’s athletic nickname. Inexplicably, the only choices given to stakeholders were “Lightning” and “Golden Eagles,” neither of which had any historical or logical connection to Marquette.

In May 2005, the university changed the nickname to “Gold,” but the decision was reversed after public backlash.

Who is the greatest Marquette Golden Eagles?