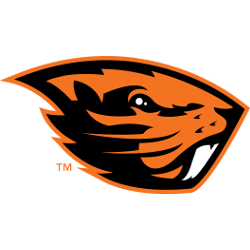 History of the Beavers

The Oregon State Beavers are the athletic teams that represent Oregon State University, located in Corvallis, Oregon. The Beavers compete at the National Collegiate Athletic Association (NCAA) Division I (Football Bowl Subdivision (FBS) for college football) level as a member of the Pac-12 Conference. Oregon State's mascot is Benny the Beaver. Both the men's and women's teams share the name, competing in 7 NCAA Division I men's sports and 9 NCAA Division I women's sports respectively. The official colors for the athletics department are Beaver Orange (Pantone 165), black, and white.

The primary rivals of the Beavers are the Oregon Ducks of the University of Oregon, located 45 miles (72 km) south of the Oregon State campus in Eugene, Oregon. The football rivalry between the Beavers and Ducks, once known as the Civil War, was one of the longest-running in the country, having been contested 123 times through the 2019 season. Other regional rivals include the Washington Huskies and Washington State Cougars.

Nickname
Beavers - In the early days of the institution, Oregon State University's athletic teams were known as the Aggies. When orange uniforms replaced the drab sweatshirt gray and tan jerseys, the teams were referred to as the Orangemen.

In 1916 the school yearbook was renamed "The Beaver" and the name Beaver became associated with the school. It is believed the press also had some influence in changing the name, particularly L.H. Gregory of The Oregonian newspaper. The name gained instant popularity among alumni and students.

The Beaver is the state's official animal.

Who is the greatest Oregon State Beavers?