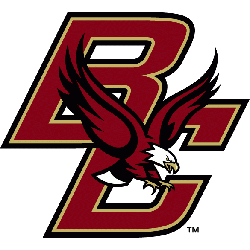 In 1892, Boston College President Edward Ignatius Devitt, S.J., grudgingly agreed to the requests of two undergraduates, Joseph F. O'Connell of the class of 1893 and Joseph Drum of the class of 1894, to start a varsity football team. Drum would become the first head coach, albeit an unpaid position and O'Connell was captain. On October 26, 1893, BC played its first official game against the St. John's Literary Institute of Cambridge followed by its first intercollegiate game against MIT. BC won the first game 4–0, but lost 6–0 to MIT. Some of the original team's alumni had particularly significant careers: captain Joseph Drum became the first BC graduate to be elected to the U.S. House of Representatives, Joseph F. O'Connell was elected to the U.S. House of Representatives, and running back James Carlin became president of the College of the Holy Cross.

Nickname
Eagles - The Eagle nickname and mascot for Boston College's teams were given by Rev. Edward McLaughlin. Fr. McLaughlin, incensed at a Boston newspaper cartoon depicting the champion BC track team as a cat licking clean a plate of its rivals, penned a passionate letter to the student newspaper, The Heights, in the newspaper's first year in 1920. "It is important that we adopt a mascot to preside at our pow-wows and triumphant feats," wrote Fr. McLaughlin. "And why not the Eagle, symbolic of majesty, power, and freedom?

Who is the greatest Boston College Eagles?