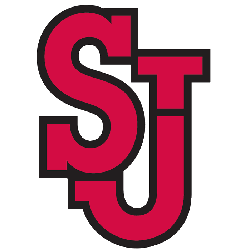 St. John's is the 7th most winningist program in college basketball history (1686 wins), St. John's boasts the 7th-most NCAA tournament appearances (27), two Wooden Award winners as national player of the year, 11 consensus All-Americans, 6 members of the College Basketball Hall of Fame, and has sent 59 players to the NBA. However, St. John's currently holds the NCAA Division I record for most NCAA Men's Division I Basketball Championship appearances without a championship. The Red Storm play most of their home games at Madison Square Garden, "The World's Most Famous Arena", while their early non-conference games are held at Carnesecca Arena on the St. John's campus in Queens. St. John's University holds the second best winning percentage for a New York City school in the NCAA basketball tournament (second to City College of New York - which won the 1950 NCAA Division I Championship). St. John's has the most NIT appearances with 27, the most championship wins with 6, although they were stripped of one due to an NCAA infraction. The 1910 - 1911 St. John's team finished the season with a 14–0 record and was retroactively named the national champion by the Helms Athletic Foundation and the Premo-Porretta Power Poll. In 2008, St. John's celebrated its 100th year of college basketball.

Nickname
Red Storm - In spring 2009, St. John's allowed its students to vote on the new official Red Storm nickname. At a soccer game in fall 2009, members of the Athletics Department announced that a Thunderbird had received the majority of votes and would become the new nickname.

Prior to the 1994 - 1995 school year, the university's nickname was the St. John's Redmen, which referenced the red uniforms worn by its teams in the competition. The name was interpreted as a Native American reference in the 1960s, and the university did have a mascot (adorned in Native American dress), which eventually led to the team's name changed to the Red Storm. The change happened at a time when there was mounting pressure on colleges and universities to adopt names more sensitive to Native American culture. The Redmen name still remains popular among fans, however, as does "Johnnies". On September 18, 2009, the new mascot, which was voted on by students, was revealed; Johnny Thunderbird.

Who is the greatest St. John's Red Storm?